The City of Tampa Parks Department hired me as superintendent of the Lowry Park zoo in the spring of 1984. Officially, I was selected by Mayor Bob Martinez, but it was upon the recommendation of the people who interviewed me—Parks Director Ross Ferlita and his boss, Joe Abrahams, the city’s parks and recreation administrator.

The cages I inherited were mostly chain-link boxes of various sizes that housed lions, tigers, pumas, jaguars, bears, and primates. Two chimpanzees lived behind iron bars covered with heavy chain-link fencing that rendered them almost invisible, while otters and alligators swam in water-filled pits. The lone elephant was confined to small pen with a shelter about the size of a two-car garage.

The Lowry Park Zoo was quite a letdown for me, after having worked at modern zoos in Toronto and Louisville. It was a free zoo which might explain why it was necessary to post crude wooden signs on most cages that warned: City Code: cruelty to or harassment of animals is prohibited & subject to imprisonment & fine. But, the good news was that all of that was about to change. The Lowry Park Zoo Association had been formed in 1982, at the suggestion of the Tampa Parks Department, to raise awareness of the zoo and to promote a public-private partnership that would fund its renaissance.

When we announced the rebirth of the zoo in the summer of 1984, we heard from plenty of naysayers. They questioned the need for another zoo when we already had Busch Gardens. They scoffed at the idea of paying admission to a city zoo. And they really took exception to the multimillion-dollar price tag attached to the venture—a price that seemed to be escalating. But as the plans were unveiled, minds began to change. Mayor Bob Martinez had a vision that was shared by the Lowry Park Zoo Association, a group that was led by Lowry family member Sally Lowry Baldwin.

We revealed the design plans for the new zoo a few weeks after my arrival and Mayor Bob Martinez committed $5 million of city money to get the project started in Phase one. A month after that, the Lowry Park Zoo Association announced it was moving ahead with its fundraising efforts in order to finance the first phase of the zoo renovation.

We held our first event in August 1984 when we unveiled a master plan. Our design would use water barriers and dry moats to create naturalistic habitats for the animals, while increasing the size of the zoo from eleven acres to twenty-four acres. The city offered $1 million to fund the initial site preparation and infrastructure improvements. This was in addition to its $5 million pledge for phase one of the zoo’s development. With the city firmly committed, the Zoo Association expanded its vision and embarked on a $20-million capital campaign. The project would include an Asian Domain (with elephants, tigers bears, tapirs, and camels), a World of Primates, and an Aviary. The plan was being developed by a New Orleans based firm, Design Consortium.

Momentum was building. We went from one of our first contributions of $207 in June 1984 from the Zonta Boys and Girls Club of Tampa, to regular six-figure donations. We raised millions of dollars in a few short years.

It was the perfect public/private partnership. We had a popular mayor and his enlightened administration working with the community’s “movers and shakers”. As the construction began to show impressive progress, the excitement grew—and donors lined up. In 1987 alone, we received $500,000 from the Jim Walter Corporation for the World of Primates, $500,000 from Barnett Bank of Tampa for the aviary, and $100,000 from CitiCorp for the sloth bear exhibit. By this time, nearly $10 million had been raised privately and the city of Tampa had increased its funding to $8 million.

This was not a simple renovation project or the construction of some new exhibits. The entire zoo was being demolished and a new zoo built in its place. But where could we put the animals? We decided to stockpile them in an unused area of the park and utilize existing cages to house them.

In March 1985, we closed the zoo to the public, and began relocating the animals. One advantage to having animals in such primitive conditions was that their new temporary facilities could hardly be worse, and in some cases, the temporary cages at the north end of the property were an improvement. 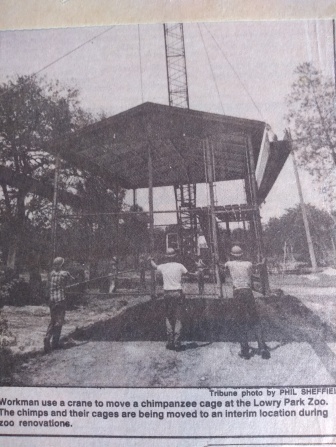 We installed concrete slabs with drainage, sidewalks, and other infrastructure. After shifting the animals into holding areas, we cut the cages from their floors, picked them up with a giant crane, swung them to the new location, and welded them to their floor in the new location. Animals were transferred into new cages in a new location, out of the way of construction. One animal, however, could not be transferred onsite. We would need to find a home for our elephant for a couple of years.

Next week: Shena moves to Canada