In September 1973, I quit my job at Busch Gardens and drove nearly 1,500 miles pulling a packed, twelve-foot U-Haul cargo trailer behind my 1970 Chrysler 300. It took two days with my brother Danny sharing the driving duties, so when I pulled into the parking lot of the Metro Toronto Zoo’s South Service Building on an overcast, chilly September evening, I was horrified to discover that Lawrence Cahill, the zoo’s director of animal operations—and my new boss—was not only not expecting me, he had no idea who I was.

It seems that Dr. Voss, the man who had interviewed me, sent me the letter confirming the job offer, and facilitated my securing Canada’s Landed Immigrant status, had neglected to pass any of that information to Mr. Cahill. After some anxious moments waiting in the car with my brother and thinking about the long drive we were about to make back to Tampa, Mr. Cahill came out to welcome me to Toronto. 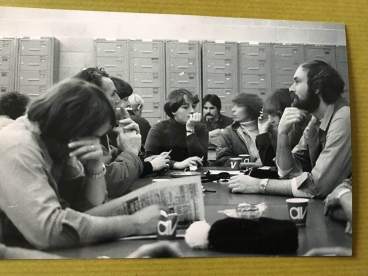 I was one of a few Americans on a team of zookeepers from Canada, the United Kingdom, Switzerland, Australia, and other parts of the world. I doubt there has ever been a more talented, diverse, and eccentric group of zookeepers assembled anywhere on the planet than those who came together to open the Metro Toronto Zoo. We endured primitive working conditions, low pay, harsh winters, and injuries from wild animals. But the results, at least from my vantage point nearly half a century later, were so worth it. 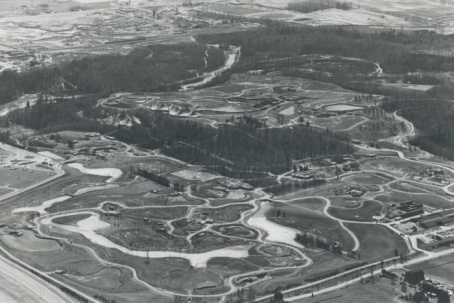 Opening an enormous zoo with thousands of animals was a complex undertaking. With animals arriving daily and their permanent homes still under construction, zoo officials rented holding barns all over the region. Conditions were often alarmingly makeshift. In the facility across the street from the zoo known as the “Main Barn,” for example, we held two polar bear cubs. They were in adjacent pens with no shift doors. In order to clean their pens, we had to transfer them out into a nearby hallway, utilizing plywood shields for protection. These animals were nearly a year old and probably over a hundred pounds each. The process went from exciting to dangerous when the bears became large enough to snatch the shields out of our hands. We were glad when our overworked maintenance crew finally found the time to install some shift doors.

We had a few animal holding spaces on the property, but not nearly enough to accommodate the growing collection. So on most mornings, zookeepers would strike out in trucks, cars, and even tractors, heading for the temporary holding areas that dotted the countryside—places like the Finch barn, the Johnson barn, the Sedgwick barn, and the old pig farm more than twenty kilometers away in Claremont. We dealt with icy, treacherous winter roads; isolated, lonely locations; and challenging animal medical conditions. We were kicked, bitten, and head-butted, and at the end of the day, we gathered at the Glen Eagles Pub to laugh at our tribulations.

We regularly received and had to care for animals that we had not only never worked with, in many cases we had never even heard of them. Two days before Christmas 1973, for example, we received a male jaguarondi from Mexico City. The jaguarondi, as we would learn from hours spent in the zoo library, is a member of the cat family that looks more like a weasel than a cat. About twice the size of a large house cat, its body is slender, and it comes in a couple of color phases: brownish gray and reddish brown. The jaguarondi once ranged throughout southern Texas and southeastern Arizona and along both coasts of Mexico south into Central and South America. Its habits in the wild had not been well documented at that time. Although an agile climber, the jaguarondi is most active in the daytime (diurnal), and prefers to forage on the ground, stalking birds and small mammals in brush and scrub.

Two weeks later, we were back in the library—this time trying to figure out how to care for a pair of cacomistles we were about to receive from Sacramento, California. The cacomistle is a small mammal that is related to the raccoon. Also known as the ringtail or ring-tailed cat, it is found in western North America and south through Mexico and parts of Central America. It is about the size of a large squirrel, with a pointed, fox-like face, and a brown-and-white ringed tail. Cacomistles, we learned, are swift, agile climbers, that are nocturnal and feed primarily on small animals, but also eat some vegetable matter.

We had to do a great deal of research as we figured out what to feed the animals and how to arrange their temporary quarters as the list of mysterious new arrivals continued to grow–aardvarks, tree shrews, West Caucasian tur, Himalayan tahr, pigmy hippo, and kusimanse. But even the familiar animals had a way of surprising us.

Opening the crate of a newly arrived animal at a zoo is always a tense moment. You never know whether the animal will walk out calmly, refuse to come out at all, or come flying out like the human cannonball at the circus. That is why I was nervous and excited at the same time. I didn’t know what to expect. My partner and I had just returned to the zoo late one evening from the airport. Our job had been to pick up two wooden crates from an international flight, return to the zoo, and uncrate the animals. We were to give them some food and water and, if they appeared healthy, leave them for the night. The veterinarians would give them a thorough exam in the morning.

I sat cross-legged in a twelve-foot-by-twelve-foot holding stall in the Toronto Zoo’s quarantine building. The heavy bedding of wood shavings and straw was both comfortable to sit in and soothing in its scent of fresh pine. I lifted the crate’s sliding door out of its track, laid it on top of the wooden crate, and settled a few feet from the opening, peering into the darkness. My plan was to sit quietly and wait for the baby gorilla to emerge.

While my partner was down the hall with his own crate, I sat cross-legged in a twelve-foot-by-twelve-foot holding stall in the Toronto Zoo’s quarantine building. The heavy bedding of wood shavings and straw was both comfortable to sit in and soothing in its scent of fresh pine. I lifted the crate’s sliding door out of its track, laid it on top of the wooden crate, and settled a few feet from the opening, peering into the darkness of the small box. My plan was to sit quietly and wait for the baby gorilla to emerge.

We sat staring at each other for a long time. He had settled with his back at the far end of the crate, glancing at me without making direct eye contact. He was thirty pounds of black fur and dark eyes, clearly frightened, and unsure of what to do next. As I was about to give up and leave him to explore after I left, he stirred and walked calmly out of the crate and into my lap. He smelled earthy—a combination of freshly turned soil and over-ripe fruit.

I wanted to comfort the little guy and welcome him to his new home. I knew he would be safe and well cared for, with the best food, other gorillas for companionship, and modern veterinary care. It would be some time before I learned the real story of how baby gorillas came to be at the zoo. For now, I just wrapped my arms around him as I would one of my own sons.

We sat for a few seconds, with him in my lap facing away from me, and then, in slow motion, he placed his mouth over my bare right forearm and bit down—hard. So hard, in fact, that I hollered in pain and jerked my arm away. I pushed him out of my lap as gently as I could under the painful circumstances, left the pen to examine my injury, and headed home for the night. I had to prepare for the next big animal shipment—a shipment of intimidating proportions in which I would play a central role.

Next week: Retracing the Route of the Titanic