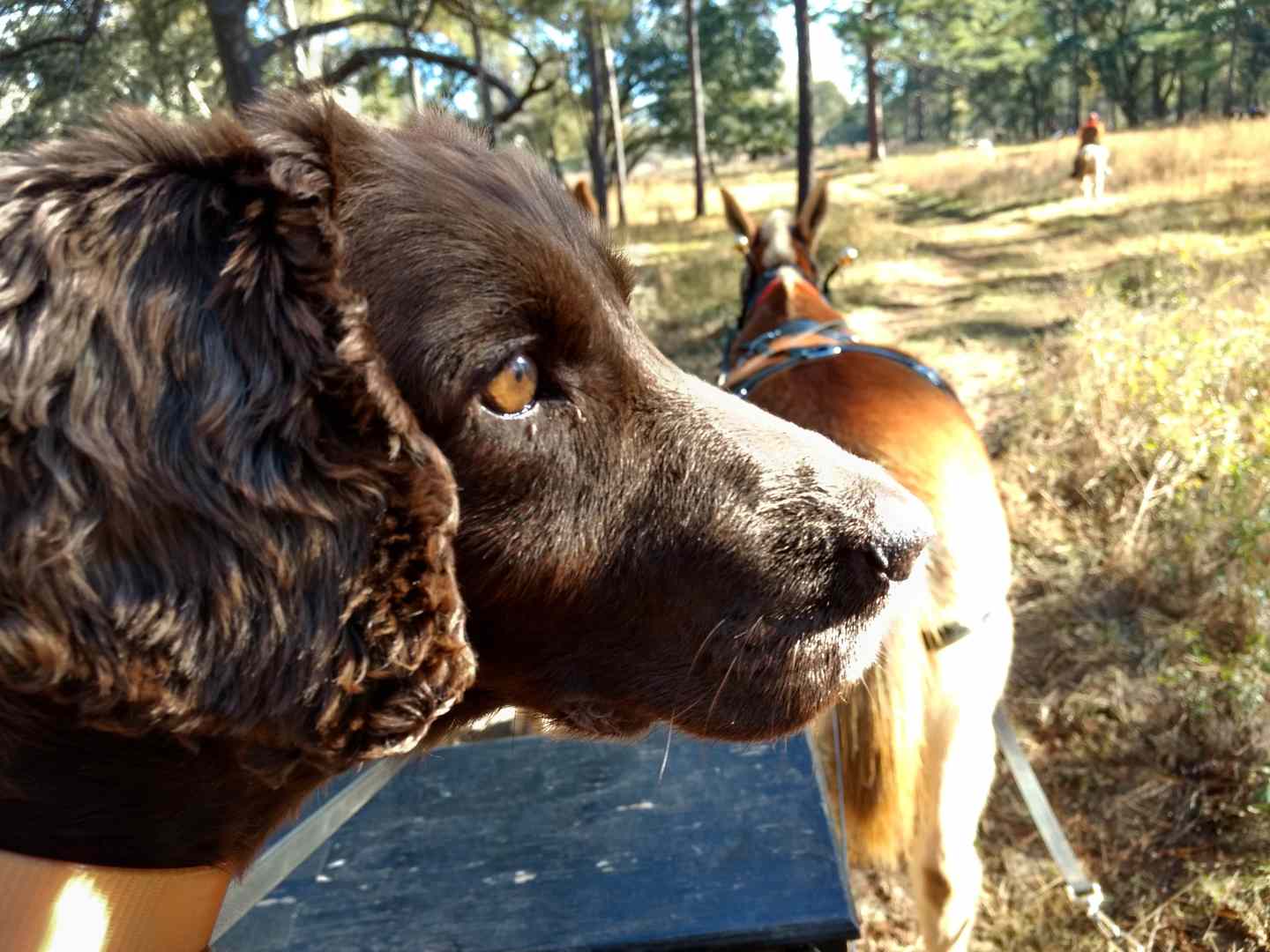 A quail hunt, at least on the property where I work, is filled with pageantry. We arrive under the ancient live-oaks surrounding the big house at nine o’clock in the morning—two mule-drawn wagons with six or eight horses led by hunting guides in white vests. It is such an impressive sight that first time guests often stand on the porch and video the procession with their cell phones.

In all this pageantry—mules, horses, wagons, and guides—one individual is often singled out. She stands on the seat of the first wagon, as she has done for nearly a decade, and is clearly the star of the show. She is a thirty pound, chocolate brown English cocker named Joy.

To say I love dogs would be an understatement. Dogs have been a part of my life since the day I was born. My childhood dogs were yard-dogs that never came in the house but in those days children seldom went in the house either, except to eat or sleep. Dogs ran with us—or we ran with them.

In my adult life, my wife and I have always shared our home with one or two dogs as part of the family, and I still grieve for those that have passed. Maybe that is why I have such an affinity for the dogs in our hunting operation and why I love spending the workday with Joy on my lap.

Every morning, after we load guests and guns and we ride out to the hunting ground, the first order of business is to stop and get two dogs out of the wagon. They are English pointers, muscular little short-haired dogs with names like Buck and Gabby, Bud and Pearl, and Ike and Dot.

They are taken out of the wagon in a male-female pair and positioned side by side in the middle of the road, with a gentle tug on their collars and an equally gentle command to “whoa”. The control of the dog handler is impressive and must be the result of hours, weeks, and even years of training. The dogs stand still and look at their handler as he mounts his horse. They are listening for their release—a low whistle, not unlike the whistle of the bobwhite quail.

Once released, they run up and down the dirt roads and in and out of the grassy lanes. By all outward appearances, they are running aimlessly at a brisk lope—aimlessly, that is, until one of them catches the scent of quail in the thick grass. Then it looks like the dog has come to the end of some invisible leash. His head snaps toward the birds and his body jerks sideways. He remains immobile with head down and tail up.

Our guide says “we’ve got a point up here.”

The other dog is usually not nearby but when she sees her partner’s point, she stops and falls into a less serious point, essentially honoring her partner.

It’s still a bit of a mystery to me, especially from my vantage point on the wagon, how the dog handler interprets the actions of the dogs. Is the dog pointing a covey or a single bird or a bird that was the morning meal for a hawk? Are both dogs on the same covey or are there in fact two coveys? This is the heart of the hunt—the dogs on point and the guide positioning the hunters; followed by the moment of truth when the birds fly, the guns boom, and the birds fall. This is when Joy, the little English cocker on the wagon seat next to me, stops whining and jumping around. She stands at full-alert and goes silent awaiting the dog handler’s call.

Most of the birds fall in an open area where they are easily picked up. Occasionally, however, a bird falls into the deep grass. That takes a little more looking, even when the hunter knows where his bird fell. After a few moments of fruitless searching, the call goes up from the guide as he looks back to the wagon and hollers, “JOY!”

Joy scrambles down the steps at the side of the wagon and navigates the lanes to where the hunters and guides await. The guide points and says “dead bird in here”, and Joy goes to work. She scrambles back-and-forth nose to the ground in ever shrinking circles until she homes-in on her target. Finally, she dives in and emerges with a bird in her mouth. She looks to the guide who says “wagon” and back she comes to deliver the bird to me and turn her attention back to the action in the field.

This is clearly a highlight for the hunters and is the reason that after ten seasons Joy is the star of the show. She is the enthusiastic magician pulling an invisible bird out the deep grass and bounding back to the wagon with her treasure. That is, I suppose, why Joy is the first one the hunters greet when they come out on the porch of the house in the morning and the last one to be touched with an affectionate pat on the head before they head in for drinks after the hunt. Who could blame her for reveling in her position as the center of attention and who could blame her for resenting it when a young male cocker named Dimi joined our wagon?

At eleven years of age, Joy has not simply lost a step or two. On some hot days she returns to the wagon too exhausted to climb the steps. She has to stop and catch her breath before clambering up to deliver her bird and flop down on the seat beside me. That is why Dimi has joined our team—to take some of the pressure off of Joy. She doesn’t appear to appreciate his assistance. She snaps at him when he hops around on the wagon and she watches his every move from the wagon seat when he is called down to find a bird.

In the 1989 film Dead Poets Society, actor Robin Williams sensationalized the Latin phrase, Carpe Diem. It is taken from the Roman poet, Horace who said in about 65B. C., seize the day; put no trust in the morrow.

I have always thought the story of Adam and Eve eating the forbidden fruit was a metaphor for what makes us distinct from the animals. In the middle of God’s garden were two trees, the tree of life and the tree of the knowledge of good and evil. God commanded Adam not to eat from the tree of the knowledge of good and evil, suggesting that if he does he “will surely die”. When Adam and Eve did eat of that tree, they separated themselves from the animal kingdom. They knew what it was to be naked and afraid (Hmm—sounds like the title of a television show). That is, I suppose, when we humans began to worry.

I am a world-class worrier. I don’t dwell on the past too much and I am largely content with the present, but when it comes to the future I worry. I just can’t help myself. Maybe that’s why I have such an affinity for animals. They don’t worry about the future. In fact, I should heed this advice I recently saw on a sign somewhere for how a dog handles worry: If you can’t eat it, play with it then pee on it and walk away.

Joy, like most dogs, has a way of squeezing the most out of every moment. When the hunters are stalking and shooting, she whines and moves around in anticipation of being called down to find birds. But when the shooting stops and the guides and hunters are picking up their harvest she stands still, barely breathing in anticipation of hearing her name called to find a bird. This cycle repeats until the end of the hunt and we are riding in to deposit the guests. That is when she lays down on the seat next to me fully relaxed.

At the end of the day, Joy does not appear to be worried about going back to the kennel. She doesn’t seem to dread spending another night alone. She doesn’t wish the wagon would slow down or speed up. She is lost in the moment—seizing the day—practicing Carpe Diem.