I don’t know about you, but the last thing I need right now is more bad news. So, as we celebrate the 50th anniversary of Earth Day while we endure a global pandemic, let’s not look at the perils we are in because of climate change. Let’s find something to celebrate. I have found hope as I look back on my fifty-year career working with animals—hope that maybe things are not as grim as they appear to be.

Last year, I wrote a little book called The View from a Wagon: Five Lessons for Living Life in the Slow Lane. It was intended to be positive and hopeful. Now, with plenty of time on my hands, I am writing a follow-up book with the working title, Lessons from the Zoo: Ten Animals that Changed My Life.

In it, I explain how I learned to trust from working around elephants and how not to be too trusting after dangerous encounters with big cats. I reflect on the animals that taught me to face my fears (reptiles), to appreciate life (dogs), and to apply the golden rule in everything I do (apes). I have learned from the animals, and I have witnessed dramatic and positive changes in the way we interact with them.

When I was a young zookeeper at Busch Gardens nearly fifty years ago, the black rhinos frightened me. They were flighty, unpredictable, and always took an aggressive approach to any situation. It was charge first and ask questions later—three-thousand pounds of meanness and aggression. Any veterinary procedures required a tranquilizer dart, and it seemed to me that even then, things never seemed to go well. 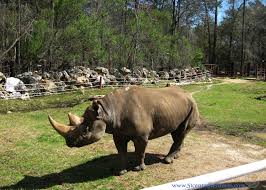 When we received two black rhinos at Chehaw Wild Animal Park in 2006, I expected we might be in for some rough times. Dubya and Sam Houston were a couple of adult males that came from a breeding ranch in Texas and were semi wild. The first time we locked one of them in our squeeze chute, he went crazy, banging the bars so hard we thought he would either kill himself or break out of the cage and kill us.

But animal care professionals had learned much about animal behavior in the last few decades. When I was deputy director at the Toledo Zoo in the 1990s, for example, we brought in trainers to help us work with the animals in our collection. These were the people who had learned to train killer whales and parrots. They were confident that their use of something called operant conditioning—using food rewards to elicit a behavior—would work with other species. They were spectacularly successful, and the animal business was transformed. The keepers at Chehaw decided to try operant conditioning on our new rhinos.

After several tedious months of convincing the rhinos that we meant them no harm, they learned to do just about anything for a piece of sweet potato. They would place their noses on the outstretched hand of a keeper when commanded to “target.” They stood calmly while staff rubbed them or checked inside their ears. They tolerated groups of rowdy schoolchildren entering their night house. And, most remarkably, I watched a rhino stand still enough to allow a veterinarian to stick a needle into an ankle to draw a blood sample while it calmly took another piece of sweet potato from its keeper.

Thanks to some patience and many hours of training and building trust, these animals went from frightened and insecure, to comfortable and docile. Their quality of life improved immensely as they settled into a life of routine activities punctuated by enough changes to make life interesting. The zoo business has evolved during my career and it excites me to imagine how it might change in the next forty or fifty years. Come to think of it, the world as we know it is likely to change, too.

Richard Louv, in his new book Our Wild Calling, interviewed one provocative eco-theologian who suggests that the world is a multi-species community of which humans are just a part. But we humans but refuse to join the club. Is it because of some divine spark—our belief in God—that we have chosen to separate ourselves from the rest of God’s creation? I wonder if that is what God intended.

We may feel that we are separate and alone as a species—above the fray, as it were—but at the end of the day, COVID-19 has proven that we are not so special. What will it take for us to give up our exalted and delusional position as rulers of the earth and recognize that we must become part of the earth in partnership with plants and animals?

If we have learned anything from the viral pandemic, it is something we have heard over and over, “We are all in this together”. The virus shows that we are not in control, because the natural world—of which viruses are a part—affects all of us equally, whether we are white, black, Latino; Christian, Jew, Muslim; American, Italian, Chinese. Global climate change may not be as dramatic as a virus that has the entire world hiding in our homes, but it does affect all of us just the same.

When Dubya and Sam Houston arrived at Chehaw, they were adult rhinos and, by some measures, too old to learn “new tricks”. But the rhinos taught me that we are never too old to learn. I earned a master’s degree from the University of Georgia at the age of 60, I self-published a novel at 63, learned to drive a mule wagon and wrote a book about it at 66, and now, at the age of 70 I am learning a new world-order. As the celebrated Spanish author Miguel de Cervantes wrote in the early 1600s in his classic work Don Quixote: “It’s good to live and learn”.

This is a marvelous and complex earth on which we live. I have a feeling we are all going to be learning more about the natural world—and about ourselves—as we begin to venture back into it. On this the fiftieth anniversary of Earth Day, I can’t say I am looking forward to what awaits, but the more I learn, the less intimidated I am at the prospect. I think I’ll go out and do something good for the earth today. How about you?