My first day on the job at the Toledo Zoo was August 9, 1991. The day before I began, a female white rhinoceros named Bernadine fell from a ledge in her exhibit. We speculated that she had been lying next to a rock ledge and simply rolled off—like a person who rolls out of bed in the middle of the night. The white rhino has a hump on the back of its neck. When she landed on that hump, I suspect the impact fractured a vertebra in her neck. Her exhibit had opened a few years earlier and was the result of new concepts in zoo design. Was that complex design a contributing factor? 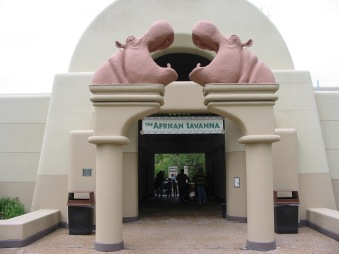 In the 1980s, while I was helping design and construct a modern zoo with naturalistic exhibits for the City of Tampa, other zoos were taking modern exhibits a step further. A new concept called landscape immersion was emerging. For several years, zoos had been creating environments in which the animals were provided a space that simulated their natural habitat in the wild. Landscape immersion took that idea a step further. Buildings and barriers were hidden, and the visitor was immersed in the landscape and substrates of the animal areas. Seattle’s Woodland Park Zoo won an exhibit award in 1981 for its African Savanna and New Orleans’ Audubon Zoo won in 1985 for its Louisiana Swamp. As immersion exhibits began to win accolades and awards, many zoos were forced to recognize their deficiencies.

In 1984, an article in Parade magazine labeled the Atlanta zoo as one of the top ten worst in the nation. The zoo lost its accreditation and outraged residents demanded that the facility be fixed up or closed down. Mayor Andrew Young assembled a new management team and privatized the governance of the zoo.

By 1986, the zoo was being redeveloped as Zoo Atlanta and its most ambitious project, the Ford African Rain Forest, opened in 1988. This great ape complex created a lush immersive environment in four naturalistic habitats that were separated by hidden moats. This allowed up to four separate troops of gorillas to interact with each other while visitors could see more than a dozen animals at one time. Specially designed holding areas allowed troops to rotated among the habitats daily.

As Zoo Atlanta was being re-born, New York’s Bronx Zoo was winning an exhibit award for its new Jungle World. This extraordinary facility was one of the largest and most complex zoo buildings in the world. It captured an acre of land under a roof that rose more than fifty feet into the air. An elevated boardwalk meandered through a space that immersed visitors in the jungle—a space where they were surrounded by hundreds of tropical animals, separated from the public and each other by a series of ravines, streams, and simulated rock outcroppings.

I suppose the size and scope of Jungle World is the reason the Toledo Zoo’s groundbreaking exhibit that opened on September 6th, 1986 was passed over for an award. Known as the Hippoquarium, the exhibit would allow the Toledo Zoo to boast for decades that it had the world’s only 360,000-gallon, filtered pool with underwater viewing for the hippopotamus.

Hippos have been kept in captivity for hundreds of years. There are even accounts of circuses carting hippos around the country in specially designed, water-filled wagons. The problem with exhibiting hippos, however, is that these two-ton animals eat prodigious amounts of vegetation and produce about fifty pounds of waste per day—primarily in the water. 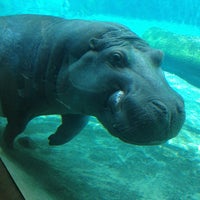 As tempting as it was for zoos to exhibit hippos in their underwater world, the view for the public would resemble a murky mudhole. The Toledo Zoo was first to overcome that obstacle with a state-of-the-art filtration system that pulled water and waste from the pool, screened it to remove the large pieces, and ran the water through sand filters that were similar to but much larger than a residential swimming pool. The final treatment was with ozone, which was a safer and more effective disinfectant for animals than chlorine. The result was a stunning, crystal-clear underwater view of hippos.

As visitors left the hippo viewing area, they became immersed in a simulated African experience called the African Savanna. The Toledo Zoo’s African Savanna, which opened in phases from 1987 until 1989, was featured in national publications and hailed as one of the finest zoo experiences in the country. People meandered down winding pathways through a variety of habitats including a Riverine area (with hippos and otters) and the Grassland (with the giraffe, elephant, lion, and meerkat). The white rhinos, Phil and Bernadine, had lived in the grasslands area for several years before Bernadine had her accident.

Bernadine was too massive to x-ray and too heavy to manipulate for therapy. Staff and volunteers signed up for a round-the-clock vigil. A weeklong effort to save her, including the use of tractors to move her and cranes to lift her, was unsuccessful. As she lay helplessly on her side where she fell, the community response was phenomenal. Construction companies donated equipment, and their operators worked through the night. Concerned citizens flooded us with calls and cards while veterinarians worked feverishly to save her. Unfortunately, Bernadine died at twelve-thirty on Tuesday, August 13.

Next week: The Carnivore Cafe