In late November 1889, the City of Atlanta’s first zoo building was being constructed in a brand-new zoological garden in Grant Park. According to news reports, it was “a handsome and substantial structure”, “an ornament to the park”, and provided “comfortable housing for the animals”. The brick structure was more than two hundred feet long with “a continuous railroad track running through the center” and its cages “were constructed of iron”.

Atlanta was joining an exclusive 19th century club—a short list of North American cities that could boast their own zoo. But Atlanta’s case is curious because most of those cities started gradually and, as their animal collections grew, they constructed buildings to house them. Atlanta went from having no zoo to speak of, to needing a “substantial” building to house an entire collection. Where did those animals come from?

A clue might be in the headline of the newspaper article that announced the new building. The new zoo was not called the Grant Park zoo or even the Atlanta Zoo. The new building was being built in the Gress Zoo—named after G. V. Gress. 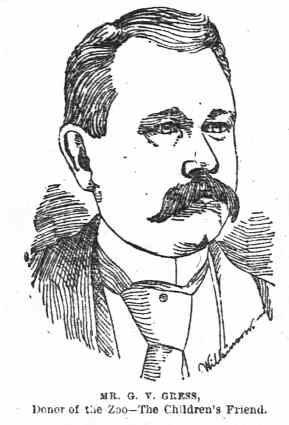 George Valentine Gress was a wealthy businessman and well-liked philanthropist. He was described by his contemporaries as “one of the most promising and progressive young men of the new south”. No one seemed to care that Mr. Gress was, in fact, a Yankee.

While still in his early twenties, Gress moved to Atlanta from Pennsylvania in 1870, few years after he served in the Union Army during the Civil War. But Gress was no carpetbagger. He found work at a lumber mill where he worked hard and rose through the ranks until he was able to purchase the company.

According to a newspaper notice in January 1885, Gress announced:

According to one report Gress was “a gentleman of whom any city might be proud. He is a young man, energetic, reliable, and respected”.

“Seven years ago,” the article goes on to state, “he was a poor boy working for three dollars a day. Now he is independently wealthy. That wealth was accumulated by industry and frugality and while it was being accumulated, he made a reputation for honesty and integrity, which are today the most prominent features of his character”.

As president of Gress Lumber Company, he controlled miles of railroad tracks along with locomotives and cars, several lumber mills, and thousands of acres of timber land all over Georgia. His personal real estate holdings in the Atlanta area were reportedly worth tens of thousands of dollars.

But why was the City of Atlanta’s zoo in Grant Park named after this wealthy lumber baron from the North? Was he a philanthropist who donated a pile of money for a zoo?

Well, yes and no—but that’s a story for another day.