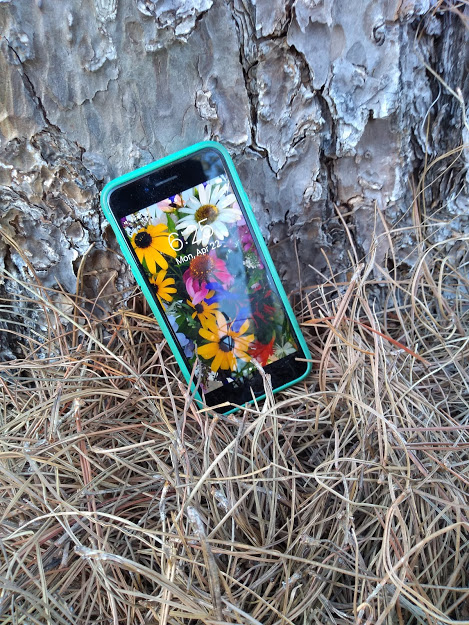 Cell phone reception is unreliable on our remote property, especially inside the house. So it is not unusual, when we arrive to pick up our guests for the morning hunt to see some of them wandering aimlessly in the front yard talking on their phones, oblivious to the canopy of century-old live oak trees overhead and the beauty of the historic house before them. Even the bustle of activity that surrounds the loading of the wagons often doesn’t deter them.  What, I wonder, can be so important? Are they talking to their offices about some big business deal? Perhaps they are encouraging children to have a good day at school.

I am not a hater of technology.  My phone is with me on the wagon—set to vibrate—and I occasionally check it when my guests are off hunting. But cell phones are, I believe, both a blessing and a curse. They can be put to good use by our guests on the wagon.  I have seen, for example, numerous guests face-time with a son or daughter in order to share the experience of the hunt. On the other hand, I see too many guests who just can’t let go.  Plenty of them are tied to their phones, often getting off the wagon and wandering around for privacy while the other hunters admonished them and try to get them reengaged in the hunt. I even had one guest suggest that we make the wagon a “mobile hotspot” so he would have better phone reception. There are, it seems to me, times and places where we ought to be able to disconnect—places where technology is simply out of place. Places where we need to undergo a Digital Detox.

Digital detox is a new term that, according to Wikipedia, refers to a period of time during which a person refrains from using electronic devices such as smart-phones and computers. It is regarded as an opportunity to reduce stress, focus more on social interaction and connection with the physical world.

Potential benefits include increased mindfulness, lowered anxiety, and an overall better appreciation of one’s environment. Studies point to moods improving after subjects put down their phones to spend time outside—changing from depressed and stressed, to calm and balanced. Cell phones, laptops and tablets allow technology users to be continually connected to the digital world, which leads to another new term—Internet Addiction Disorder.

One report says that in some Asian countries, putting a phone on the table before a meeting shows that you are a lower-class individual. You are demonstrating through this small act that you are constantly at the beck and call of others and not significant enough to be fully present in the room. I also see this in the person in the checkout line at the store who can’t stop talking long enough to acknowledge the cashier. This is not only low class, it’s just plain rude.

There are also health issues related to excessive cell phone use. The blog at Psychology Today suggests that technology can contribute to high levels of stress, place a strain on relationships and family, and even contribute to health problems—possibly including cancer. And if cancer doesn’t get your attention, how about something called death while walking? That’s how the National Safety Council refers to the nearly six thousand pedestrians who are killed every year in distracted walking incidents. The Council warns that people need to stop using phones while walking—and not just in crosswalks and intersections. Over half of distracted walking injuries occur in our own homes.

There is little doubt that technology can be addicting, as any parent of a 21st century teenager knows. Ironically, as more and more technologies exist to help us do our jobs, the concept of technical detoxing is gaining ground. Some hotel chains have offered promotions to guests willing to give up their devices and go “off the grid” during their stay, offering discounts and a menu of rewards if their guests agree to lock their phones away for the weekend.

My parents had a place in the mountains of Western North Carolina where we gathered for family reunions for years. Although the cabin had rural high-speed fiber-optic internet, there was no cell phone service. I always found it refreshing to sit on the porch swing and watch the hummingbirds fight over the feeder while hearing to the roar of the creek across the road—without needing to listen for my cell phone.

When my wife and I visited Africa in the 1980s, we were struck—and a little unnerved—by the isolation. When we were on safari, we were truly disconnected from the world. Today, there are few places left on the planet that are not connected to the rest of the world, whether through cell phones, Wi-Fi, or the internet. When friends recently travel to Africa, they shared their experiences with live updates from the Serengeti and we saw their day’s photos uploaded to the internet through the Wi-Fi at the lodge. When we were in Africa, we considered ourselves fortunate if the lodge had a two-way radio. We had cameras and surely wanted to catch that perfect shot, but when a pair of female lions ambushed an antelope at a waterhole, we just stood in awe of the moment. We did not have a cell phone up trying to catch the whole thing for a video post.

In 1994, when I traveled to the Amazon, we flew in an airplane for thirty minutes, transferred to a bus for an hour-long drive through the jungle, and piled into motorized canoes for a three-hour ride up an uninhabited river to a large houseboat moored along the bank. I doubt they had any communication with the outside world at all. I’ll bet they do now. I’m not sure I consider that progress.

To be fair, I find that most of the guests on my wagon are happy to let technology go. They get caught up in the experience and are quite accepting of the isolation. The slow pace of a wagon hunt affords plenty of time for a variety of activities. Old friends catch up on personal conversations. People enjoy their surroundings, talk about the hunt, and even engage in small talk with the wagon driver. And when technology is used, it can have some remarkably positive results.

Since Joy the retriever is aging and near of her hunting days, we have been bringing young cockers on the wagon to train for the hunt. A six-month-old solid black puppy named Cash was such a dog. He was supposed to ride on the front seat with Joy and me to observe the hunt and, perhaps, begin to learn his job as a retriever. But there’s nothing cuter than an enthusiastic cocker spaniel puppy and one of the guests on the wagon seat behind us took a shine to Cash. The man stood and reached over the seat to pet Cash, letting the little dog nuzzle and lick him. Soon the guest was talking to his seat mate about how much he’d like to take Cash home. After consulting with our guide about whether the dog might be for sale, the man had me hold Cash up for a photo. He texted it to his wife and at the end of the hunt flew the dog home in his private airplane.

On another occasion, I had a guest on my wagon who was deeply engaged in a conversation on his cell phone. When his turn came to hunt, he waved off his partner and had him hunt with someone else. Everyone’s annoyance was palpable. What could possibly be so important? The man walked behind the wagon until we stopped at the next covey and the men on horseback took their turn to hunt. He climbed back on the wagon, sat next to his partner and announced that he had just concluded a half-a-billion dollar business deal.  His partner was impressed, and all was forgiven. That man sure did enjoy the rest of his hunt.

The people who hunt with us are not hesitant about using their technology when necessary, but a remarkable thing happens on the ride to the house at the end of the day. The phones stay in their pockets as their conversations steer away from business and toward family, good times, and the beauty that surrounds them. This is what life in the slow lane can do for us. It has certainly taught me how to better focus on other people, even as I learn how to disconnect from my fast-paced digital world.