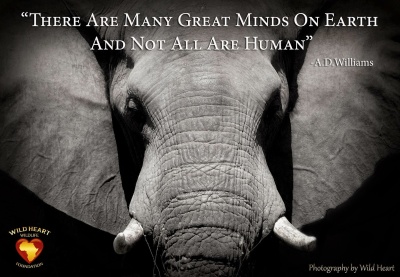 This poster came across my Facebook feed last week and it got me wondering. I can think of many humans with great minds, like Leonardo daVinci, Isaac Newton, Albert Einstein, Stephen Hawking, Miley Cyrus (OK – just kidding), but isn’t the same probably true of animals? I know it sure seems true with my pets. With my first two dogs, Simba was the smart, intuitive one and Jana was what we politely called “sweet”. Our second pair of dogs turned out the same. The folks at the kennel where we boarded Bexley called her a clown in a dog suit. She was big, exuberant, and very smart. Chelsea, on the other hand, is not the sharpest pencil in the drawer. Our black cat, Binny, was probably smarter than anyone in the house, including my wife and me, but she never let on.
Objectifying Animals
Author Barry Lopez wrote in his award winning 1986 book, Arctic Dreams, that “we have irrevocably separated ourselves from the world animals occupy. We have turned all animals and elements of the natural world into objects”. “[And] because we have objectified animals”, he goes on to say, “we are able to treat them impersonally.” If we could somehow appreciate animals as individuals, perhaps they would become more personal (and precious) to us.
I would love to find a way to test the intelligence of all of the African elephants on earth. Wouldn’t it make sense that some would be smarter than others? I’ll bet some elephants are probably geniuses. Some are wise, some are “sweet”. Some are kind and some are mean. I know that sounds anthropomorphic, but I suspect there is more to this than we can possibly know.
Nut Cracking Crows and Tool Using Apes
Look at what we already know about crows. They are renowned for their ability to recognize individual human faces. The folks at the How Stuff Works website claim that crows living in urban areas are known to gather nuts from trees and then place them in the street for passing cars to crack open the shells. Then, after waiting patiently for the light to change, they return to the street to retrieve their nutty snack. Who was the first genius crow to figure that out – without being run over by a car?
How Stuff Works also notes that lab rats find shortcuts, loopholes and escape routes in the laboratory experiments designed by the top scientific minds of our time, and cetaceans have a sophisticated “language” that humans are only just beginning to unravel. Dolphins use tools in their natural environment and can learn an impressive array of behavioral commands by human trainers. And I would love to meet the first chimpanzee who figured out that stripping the leaves off a twig and sticking that twig into a termite mound would result in a termite Popsicle treat?
Poopy Head
Early in my career as a zookeeper, one of my duties was to help walk five African elephants to their night-house and chain them up for the night – a practice that is, thankfully, no longer followed. Every evening, we lined them up and, as one trainer stood in front holding them steady, the other trainer went down the backside of the line placing a long chain around the back ankles. This gave them freedom to walk around in a certain radius, to eat and lie down, but not to get into too much mischief overnight.
On one of my first evenings chaining the elephants on my own, as I bent over to do the old matriarch Elke, something thudded onto the top of my head. It was heavy, soft, and a little larger than a softball. As it rolled off my head and onto the floor I could see it was a turd. When I looked up, my partner was laughing.
“If you stand off to the side,” he said helpfully, “that won’t happen.”
Right.
At that time, I imagined a big, dumb animal inadvertently pooping, and me being in the wrong place at the wrong time. But as I look back and think about the above-captioned poster, I’m not so sure. What if Elke did that on purpose? She was the oldest and most experienced. She had seen lots of handlers come and go. She knew I was the new guy and didn’t know to stand to the side. I wonder if she chuckled when she nailed me and her infrasonic communication rumbles caused a ripple of silent laughter from the other elephants, as well. I didn’t think it was funny at the time but it sure would make me happy to think these elephants were having some fun at my expense.
There is something primal and powerful within us that wants to separate us from the animals, to make us special among all creation. But what if some of these incredible things animals do are not the result of millions of years of evolution and some deep-seated instinct? What if they are the result of an unusually smart animal – an Einstein of the animal kingdom – figuring something out and passing it along? Which brings me to this thought that is sometimes attributed to Einstein himself:

Everybody is a genius. But if you judge a fish by its ability to climb a tree, it will live its whole life believing that it is stupid.