When the Metro Toronto Zoo opened its 710 acre “zoogeographic” zoo on August 15th, 1974 it was, I believe, ahead of its time. No other zoo took the zoogeographic theme (organized around groups of animals from the same parts of the world) to the level of the Toronto Zoo. Its huge continental areas of Indomalaya, Africa, the Americas, and Eurasia had sprawling, outdoor animal exhibits and each area had an indoor pavilion that was a combination zoo, aquarium, museum, and botanical garden. It would be another ten years before other zoos began to catch up, with the opening of large indoor facilities like the Bronx Zoo’s Jungle World.
I had been working there for nearly a year when the Toronto Zoo opened, and I have long been puzzled about why I have no recollection of the opening celebration. It was the day we had all been working toward and, yet, it is as though I was never there. Then, as I looked back on my diary and notes, it hit me. I was too busy working.
In the days leading up to the grand opening, I was a senior keeper in the Americas section of the zoo. This included an indoor pavilion, a large polar bear complex with underwater viewing, and a South America paddock. The pavilion was largely underground and it held the most diverse collection of animals a senior zookeeper could be expected to care for, including mammals (beavers, otters, cacomistle), birds (band-tailed pigeons, native song birds, waterfowl), reptiles (alligators, rattlesnakes), and fishes. In the days and weeks leading up to opening, and especially on opening day itself, we were frantically preparing exhibits and receiving animals.
The fish had been in their tanks for a month or so, but most of the animals we were receiving had been quarantined and stockpiled at barns and holding facilities all over the region. On July 17th, we received 1.1 (1 male and 1 female) cacomistles from the Claremont barn and 4.2 armadillos from the south service building. On the 19th, it was a Mississauga rattlesnake that was donated and four alligators from Toronto’s soon-to-close Riverdale Zoo. On the 23rd, we received two band-tailed pigeons and on the 29th, one opossum and three young alligators from Riverdale. On July 31st, we received a large alligator from Riverdale, a jaguarondi from Claremont, three skunks, fourteen quail of three different species from Kirkham’s barn, two fox snakes, seven box turtles, and a diamond-backed terrapin. The next day, on August 1st, we received a huge alligator, eighteen song birds, and an otter. We were scrambling to get animals introduced to their new accommodations and to each other. And when opening day came and went, our challenges continued with one day running into the next. It was, I am told, quite an event those forty years ago – and I was there. I just wish I had seen it! 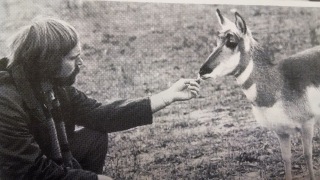